Remember back when Lady Satan’s third appearance in Red Seal Comics #17 was reprinted, but with her name changed and other major alterations to the story? Well, it happened again to her following appearance! This time, it occurred in Authentic Police Cases #5 in 1948, which shows just how much of a fuck publishers gave about comic titles back then, seeing as this story contains no police and the presence of a ghost makes its authenticity dubious at best.

In my previous post I speculated that her name was changed from Lady Satan due to prudishness about having a hero named Satan, but in this case there appears to be a more pragmatic motivation. Lady Satan’s original non-magical-ass Nazi-Fighter appearance was reprinted in Authentic Police Cases #2 (again, why did this comic have that title?). Having Lady Satan appear as a normal human fighting Nazis and then, 3 issues later, as a sorceress fighting a ghost would be just a teensy bit disorienting, so that’s the most likely cause of the change.

So, let’s see what they changed.

Oh god. All the color ran out of her dress onto the floor!

That caption clearly establishes this story as “authentic”. Obviously. When I read a badly written single sentence that tells me that this story is utterly dubious, I know this must be an authentic police case. And the fact that “Marco’s Villa” sounds more like a flower shop than a Gothic European estate doesn’t make me suspicious at all.

There’s also one very subtle little change that you probably haven’t noticed yet. Take a look at the original then come back to this one. See it?

There’s a signature on this one.  Down on the bottom right where that skeleton’s ball sack used to be. Specifically, the signature of Ralph Mayo. Who the hell is Ralph Mayo? I don’t have the foggiest. All I could find on him was that he created a villain called Big Eye for DC. Who is Big Eye?

Eye want you for the US Army! …And to have nightmares for the next month.

We have learned something important here. Ralph Mayo has a better (if more literal) understanding of how names work than the publishers of Authentic Police Cases.

(And seriously, they couldn’t bother to fix her legs?)

See that! The word “police”! The title is accurate! (Actually, it is pretty authentic to portray the police as mostly useless and absent. Maybe the Viscount was black.)

So she’s Marietta now. And apparently she and Nancy are friends. And the printer ran out of every color of ink except red.

Having them be friends is actually a good change, as it corrects an aspect of the original story that was so nonsensical that I strongly suspect it was the love child of creationism and Un Chien Andalou. How the fuck did Nancy know where to send the letter to Lady Satan? Why is Lady Satan taking requests via mail?

In this version, that’s not a problem.

The rest of the story proceeds almost exactly like the original, except with the name Marietta instead of Lady Satan, and with her dress in green rather than red, and EVERYTHING ELSE in red red red red red. Seriously, the comic Red isn’t this red. Grendel: Black, White and Red isn’t this red. If there were a comic called Everything is Fucking Red, it wouldn’t be this red. The colorist must have been in a serious hurry to meet a deadline.

However, he did get one thing right. After Lady Sa– errr, Marietta says she’ll slip into Nancy’s clothes, she is clearly seen to be wearing Nancy’s blue dress instead of her own green dress. So that’s two points where this version improves on the original.

But coloring aside, the comic is pretty much identical to the original, with even the exact same dialogue in almost every panel. The few exceptions are when they change dialogue in order to make the story make more sense. Observe:

My auto suggestion would be to drive a Honda. Good gas mileage.

There. Isn’t it so much simpler to say that the chains were old and corroded, rather than to have her display super strength immediately after showing her getting knocked the fuck out by an old man?

And then there’s this: 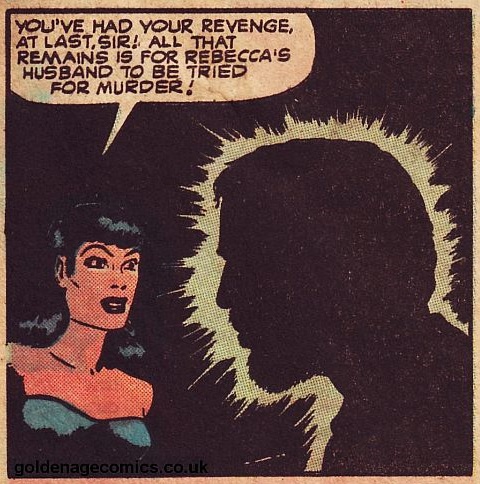 See? It’s easy. You don’t just leave the husband’s fate completely unresolved, like in the original. A single line of dialogue corrects the problem.

All in all, the de-satanized version is actually slightly better than the original, in that it at least corrects a few of its flaws.

But we’re not done! Believe it or not, the Red Seal 18 story was de-satanized AGAIN in 1952, this time in Strange Terrors #1. (To read up more on this, check here and here.) Yes, this same story was re-written and published again twice. Anything to just keep churning out those fucking comics, amiright?

And has any character ever been reworked into a new character with a new name this many times? Poor Lady Satan…

WHY DOES THIS KEEP HAPPENING TO MEEEE????

What’s even weirder is that they seem to be copying from the Authentic Police Cases version, not the Red Seal version, as indicated by the fact that this is again set in post-war Europe, whereas the original didn’t give a location.

And dig that stilted opening sentence. What the hell does it even mean? (And they still haven’t fixed her fucking legs. They even forgot to color in her shoe straps, so now her already gimpy-looking foot looks like it’s really veiny.)

They also still have Mayo’s name on it. I don’t know if he really drew it, or just put his name on it to claim it as his, seeing as the original had no credits at all, as was common in the Golden Age when creators were treated like property. Either the original publisher removed the signature, or Mayo put his name on artwork that wasn’t his. Either way, there’s probably something nefarious going on here. Another possibility, though, is that he drew it, didn’t originally sign it, then signed it later when it was re-printed.

Unlike our previous de-satanization, this one drastically alters the source material. Every line of dialogue is changed. But again, most of the changes are an improvement. But not all…

Yeah, ’cause I’m sure Berlin immediately after the war was a great place to be…

That last panel is a zoom-in of the original, removing the spooky house from the image. I guess this is because it was more of a mansion than a castle, and Castle Karloff (an obvious reference to the actor) is a better name than Marco’s Villa. But the effect is to reduce the horror aesthetic of the overall comic, so they sacrificed a bit there.

Anyways, so now rather than Lady Satan, and rather than Marietta, she’s Celeste. To be precise, Celeste Karloff (the name just rolls off the tongue), as we now see the victim’s name is Olga and she and Celeste are sisters. Lady Satan and Nancy started as strangers, then became friends, and now they’re sisters. If this comic had been de-satanized one more time, they would have been Siamese twins.

That first panel also seals the deal for me–this was copied from Authentic Police, not Red Seal, seeing as it the original didn’t actually show the letter or mention any military police. The comics publishers were playing hot potato with the original artwork for this story.

There’s no need to go over the rest of the story in detail, since it’s the same story, but with completely new dialogue that in most cases makes the story less fucking nonsensical. For instance, in the new version they explain that Celeste spat out the poison drink she tasted. The ghost doesn’t make creaking footsteps. She doesn’t put on Nancy’s/Olga’s clothes and she’s not mistaken for Nancy/Olga by the housekeepers.

The de-satanization of Red Seal 17 was a hacky shitstain on the world of comics, but these two of Red Seal 18 are actually a slight improvement on a story that had serious issues (get it?). It still sucks that they couldn’t call her “Lady Satan” though. So fuck these comics anyway!

The comics are, of course, available for free at the Digital Comic Museum. Check ’em out! And see you next time.