To see Part 1 of my review of Hansi: The Girl Who Loved the Swastika, click here.

So, let’s recap where we left off. Hansi, the dumbest bitch in Czechoslovakia, has become a devoted Hitler Youth follower and blindly regurgitates Nazi propaganda without any thought or reflection whatsoever. She’s so blinded by Nazism that she decides to stay in Prague even when the Russians are invading, complete with their borscht and vodka and communism and all. Her boyfriend, Rudy, says he hopes she gets raped to teach her a lesson, and this is exactly what happens. Except that everyone except her gets raped, because that’s how the plot wants things to be.  She and her friend Hair Helmet easily escape the Russian concentration camp they were in, and now they’re on the run.

“Because there’s no rape in the American military. Besides, we’ll probably be taken prisoner, and I’ve heard there’s even less rape in American prisons! USA #1!!!”

Okay, I get the gangsters part. But “gum-chewing”? Why would Czechoslovakians hate our mastication-based freedoms?

Hansi and Hair Helmet keep moving west in search of Glorious Wonderful Americans, and along the way they have a pseudo-philosophical debate about peace and love, which causes Hansi to recall her mother’s advice about not forgetting Jesus, because all the pain and suffering she’s witnessed (and that this supposedly omnipotent being must have just stood by and watched) still hasn’t sunk in. Gang rape? Jesus loves me!

After joining up with a group of refugees trying to make a clandestine run for the border into West Germany, they are spotted by Russian soldiers.

The “miracle” of hiding and being quiet, you fucking moron. It was just two panels ago.

Hansi has now very suddenly started aping certain Christian platitudes, such as attributing events to “miracles” even when the actual, mundane cause is really fucking bloody obvious. Don’t expect the comic to be consistent with this, though. But it is notable that the Christian boilerplate re-entered her patois only after the Instructional Rape that Rudy wished upon her. Written by a woman, folks.

Look in the background in that top panel. I’m pretty sure Hair Helmet is dead. At least, I think. She appears to take a bullet. We don’t see her any more after this panel. Hansi apparently doesn’t give a shit about her, because poor Hair Helmet doesn’t have any more of a role in the rest of the story than Uncle Owen and Aunt Beru. Hansi never mentions her again. Hansi: Stupid, and selfish.

“I remember hearing about gum-chewing gangsters from somebody…who was it? Ah well, she was probably a twat anyways.”

Is gum-chewing gonna be some kind of weird leitmotif in this comic from now on?

Anyways, Hansi and the child she rescued are taken in by American soldiers (who are living in barracks much nicer than anything any real soldiers ever lived in).

Of course Spire Christian Comics felt the need to plug Archie and all his Christian wholesomeness in this scene, but this scene is a bit anachronistic. In 1945, the title would have been Archie Comics. It wasn’t shortened to just Archie until the 50s. Get it right, assholes! Besides, if I know anything about the American military, if that guy’s reading an anachronistic Archie comic, it’s this one. 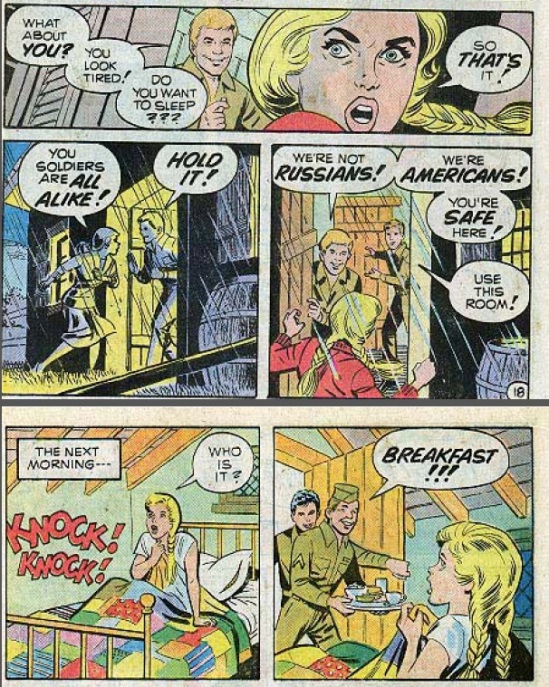 Would you like a Freedom Foot Massage? A Liberty manicure? Perhaps a Jesus facial?

Rape you? What do you think we are? Russian?

This comic sure knows its audience. Fundamentalists suck at subtlety and nuance, and this comic makes sure to state its point so bluntly that even the dullest godhumper mind can grasp it. Russians bad. Americans good. Breakfast!

Were the American soldiers quilting in their free time?

The Americans give Hansi the royal treatment for a couple pages, then she’s taken in by the Red Cross, where Rudy’s sister finds her and informs her that Rudy’s U-boat was sunk, and he’s presumed dead. Good fucking riddance, I say. Sleep with the rapist fishes, Rudy.

Ugh. By this comic’s logic, that means Rudy’s mom got raped, too.

And yet, all she does is just fucking stare stupidly into the distance and puke up stereotypes and propaganda she absorbed from others. Other than the fact that she’s got a pretty face (clearly modeled on Betty Cooper–go back to that gang rape scene and imagine it in an issue of Betty and Veronica), what appealing qualities does she have? She even hates gum!

She gets a job as a teacher in Bavaria, and her life is fucking wonderful and perfect. As lives in war-torn nations are, naturally.

The hills are alive with the sound of privilege!

Hansi, you selfish bitch! You’re surrounded by people who survived the Holocaust, the families of those who didn’t, soldiers who were traumatized by the most destructive war ever fought, families devastated by all the fucking carnage and horror attendant to worldwide warfare, and you learn that your ex didn’t die a horrible death in a sunken U-boat along with all his comrades, and your very first thought is whether you should date him again?

Wait. Is that Hair Helmet? Is she a redhead now? I honestly can’t tell. The comic never tells us who this redheaded chick is, and we never see her again. I don’t think she’s Hair Helmet, as she appeared to be quite dead earlier. Unless… Oh my god, she’s a ginger zombie! She’s going to eat our brains! (Don’t worry, Hansi, you’re safe.)

The ginger zombie apocalypse might go some way in explaining the Dutch angles on those last two panels. Every now and then the artist tilts a couple panels, but there usually seems to be little rhyme or reason to it. Maybe he/she just got bored drawing Jesus crap for a hack publisher and decided to mix things up for shits and giggles.

So, anyways, yeah. Rudy’s back. Turns out he escaped in an inflatable raft. How the fuck he pulled that off in a submarine is anybody’s guess. He and Hansi get married. Because that’s what you do when you’re a girl. You marry the guy who said he hopes you get raped. But the marriage is unfulfilling. What could be missing?

Get out the Q-Tips, bitch, ’cause you’re about to get ear-fucked by scripture!

Hansi is reluctant at first (for, like, a single panel). But before long…

How fucking big is the print on that Bible?

She and Rudy just start mindlessly regurgitating one Christian trope after another. All it takes is a few Bible verses and their little pea-brains are immediately won over.

Let’s note something important here. Hansi has not changed. She just as much of a blind follower as ever. She’s just as spoiled and myopic as ever. She’s the same person she was from page 1, but with a layer of Jesus smeared over her. That’s it.

And when has she ever been disappointed? Almost everything has gone her way, and every hardship she’s faced has been easily circumvented. Every shit-eatingly stupid decision she’s made has only resulted in harm coming to other people, like Rudy (sunken U-Boat) and Hair Helmet (raped, shot, and zombified).

The shallowness and gullibility of her character of course would be lost on this comic’s target audience. You can see why in the second panel above. “Do we DARE to believe?” As if gullible belief in a bunch of old fables is somehow a brave act. As if joining the Christian majority in the West is somehow courageous. “Dare to be a blind follower!” Because if your beliefs are petty, childish, and simpleminded, you can console yourself with the lie that you’re actually a hero.

Anyways, Rudy and Hansi take their new found faith and move to America. But they’re shocked when they arrive.

Go back to Czechoslovakia, you ungrateful whore!

Oh my god! America has hippies and litter and black people! Maybe we should go to that Real America Sarah Palin keeps yammering about.

So diet food is evil now? Is there anything fundamentalists won’t complain about? (That HEALTH AIDS sign is a bit unfortunate, but not unprecedented.)

Hansi decides that America is too materialistic and hedonistic and needs more Jesus. I would inform her that America’s rampant materialism is a direct product of that capitalism thing that the fundamentalists are so fond of, but since she’s shown no sign of being able to connect two ideas that some authoritarian belief system didn’t already connect for her, it would be a waste of time. Hansi blames the problems she sees in her students on their lack of stupidity, and realizes what the world needs is for her to spread her idiocy far and wide. We then get the most revealing series of panels in the whole comic. 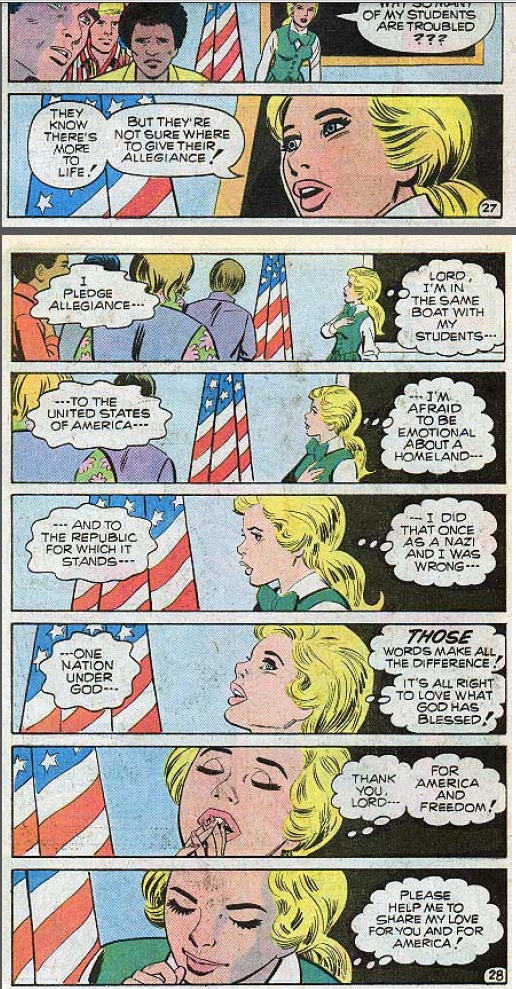 Am I the only one who can’t help but think she’s having an orgasm during this? (And for someone who apparently loves America so much, how did the author manage to get the Pledge of Allegiance wrong? How do you fuck that up?)

Remember when I said she hadn’t changed a bit from when she was a Nazi? Well, that is actually the entire message of this comic. Be like the Nazis, but replace Hitler and Victory with Jesus and America. It’s good to be God’s little fascist robot!

There is no other way to interpret this. Hansi’s flaw wasn’t in her bigotry, her ignorance, her blind jingoism, her sheep-like devotion to an authority figure, her inability to think for herself, or her rah-rah attitude towards the destruction of other nations. Those things are all just fine. She just didn’t include Jesus in the mixture. That’s the only shortcoming that this book ever points out in her.

Hansi goes on to create a ministry where she saves people from horrible fates like being a hippie or not being a God-Nazi. She goes to prisons to preach “the word” (presumably she still thinks there’s no rape in this country, or she might focus on more pressing matters in our prisons). When I think about all the resources people waste on spreading nonsensical beliefs, and think about how many starving people those resources might have fed, I get pretty pissed off. But not as pissed off as these two panels make me.

I’m pretty sure that “Hitler taught me many things” isn’t the best way to start a speech.

Hmmmm. Look at the faces in that crowd. I wonder whom he meant by “militants”…

Hell, that’s just what this comic needed. More fucking racism. Yup. Let’s pile even more of it on for good measure! 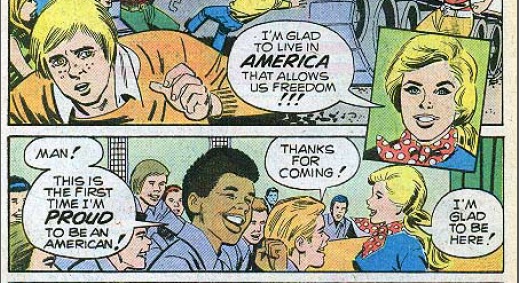 “But I have this weird feeling that a white woman is putting words in my mouth.”

So Hansi speaks at the prison, inspiring all those black militants to love America for this first time ever.

You know all those accusations against Barack and Michelle Obama that they don’t really love America and are always apologizing for it and they’re also somehow simultaneously atheist and Muslim and communist and terrorist? That shit ain’t new. The right wing has been otherizing blacks as America-hating militants for generations. Kinda like how somebody I’ve heard of would portray the Jews. There was this group–I forget what they’re called–but they always portrayed Jews as rats who were feeding off of society and didn’t sufficiently love some western European country… Hmmmm.

And this is the note on which the comic ends. No shit. There’s just one more panel of Hansi in front of the American flag saying she loves Jesus, and we’re done.

What have we learned from Hansi? Well, the name “Hansi” looks like a diminutive for “Hansel”, which is a boy’s name. So I conclude she must be a cross-dressing homo-Nazi who hates dieting. Makes about as much sense as anything else in this comic.