Hey, let’s talk some more about Lady Satan, my favorite Golden Age superheroine. If you haven’t seen them already, be sure to check out the first two installments of Comic Relief:

Not that you need a lot of background for continuity. Without any explanation, Lady Satan is now a very different comic. Envaginated Satan appeared only in reprints in 1942-1944, but original Lady Satan stories started appearing again in Red Seal Comics #17, which hit stands in 1945. And here’s the first image we see of her: 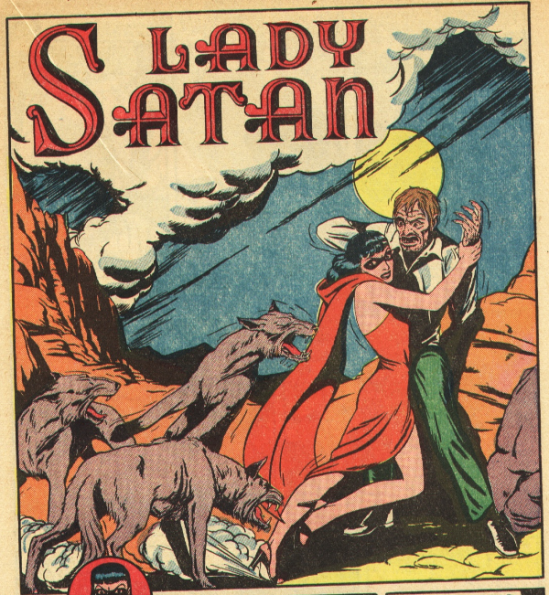 Good thing I brought my Bat-Snausages to pacify them!

Lady Satan is now a horror comic! Seems more appropriate to the name, at least.

The re-tooling is understandable. The war was over, so she could only keep fighting Nazis if she were very…confused. What to do? Completely revamp the character, that’s what!

And it was pretty common in the Golden Age for characters to be completely retooled without any explanation in order to follow the latest trends. One of my favorites is Moon Girl. When superheroes fell out of popularity in the late 40s, she was retooled as a crime comic (in title, at least) called Moon Girl Fights Crime (with beautiful artwork by Sheldon Moldoff). I say in title only because it was actually a horror comic with werewolves and mermaids and implied lesbianism* and shit. And when crime and horror comics fell victim to public moral panic, she was retooled again as a romance comic called–get this–A Moon, A Girl…Romance! Greatest. Name change. Ever.

So, anyways, let’s get back to the actual topic of this post. What’s Satan With Tits doing these days? 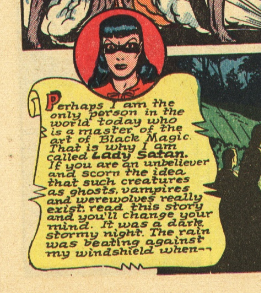 Oh god, she’s evangelizing to unbelievers! Truly this is a horror comic!

Wait….what? She has magical fucking superpowers now? When did that happen? I… I’m confused. Which is actually a very normal feeling when reading any kind of comics. Compared to, say, the Clone Saga, Titty Devil suddenly getting magical powers isn’t really that baffling. If you really want a brainfuck, try spending 10 seconds figuring out just what Judas Traveler was all about. It will implode your mind, man.

So, anyways, our story begins with Lady Satan, in costume, driving down a dark, lonely road. Because, I guess she does that a lot. I heard Aquaman spends his nights sitting alone on the subway gently weeping about how everyone thinks he’s useless.

Along the way she finds some lost children and offers to take them home. But then… 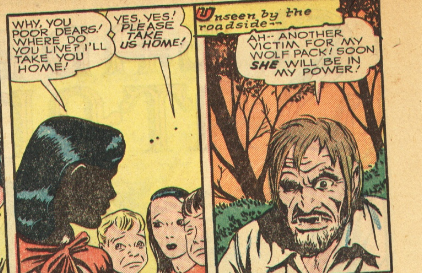 She will be in my power! No one can resist my underbite!

She’s spotted by a guy who looks like the kind of mutant you’d get if Shaggy and Scooby ever fucked and had some kind of demon spawn. He’s a master of werewolves, and he’s our villain for this epic adventure. He turns the children into werewolves and sics them on Lady Satan.

Maybe we can stop for some ice cream and — WHY!! Then later we could watch a ballgame to — WHEN!! Sorry, I have a rare disorder called Interrogative Tourette’s Syndrome. WHERE!!

Boo yah! Wolves up your ass, bitch. And unfortunately for you, not one of them is that big hunky Jacob kid from Twilight. He’s not actually a wolf. He’s a totally different kind of animal.

The fight doesn’t last long, and not because in 1945 “three” somehow rhymes with “die”. From under her robe, Lady Satan produces the XANDA POWER which drives the wolves away. What’s the Xanda Power you ask? Does it involve having Xander Harris show up and distract the wolves by getting himself captured? Nope. The comic doesn’t bother to explain it. Oh well.

Underbite gets away with his wolves, but Lady Satan vows to save the captured wolf children. And she knows just how to track them. 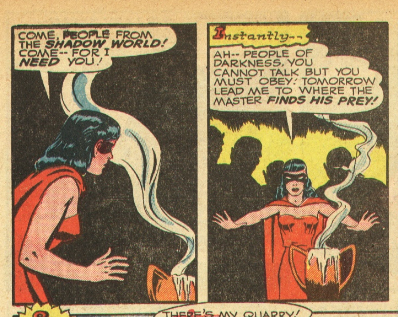 Dark people who must obey? Maybe they should call her Lady Uncomfortable Insinuations…

So after her black slaves (there’s really no other way to think about it) lead her to Shag-a-Scoob, we get what the UN has officially declared to be the creepiest panel in this comic. 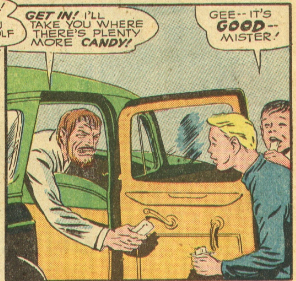 The werewolves are Catholic! That’s the worst kind of werewolf, even worse than the Mormon werewolves in Twilight!

Okay, yeah, this panel is super creepy. But it’s also one of the most interesting panels in the story. It reveals that this story is actually a metaphor for the harm done by child abuse and the dangers of people who prey on children. Think about it. The man lures children in with false promises. Makes them his slaves to do his bidding. And then turns them into monsters, representing the fact that abused children are more likely to abuse children themselves when they grow up. Lady Satan even later says, “The fiend was feeding them something that placed them in his power,” representing the fact that child molesters like Jerry Sandusky lure children with gifts, but that what they really want is power over them because they get off on it.

Holy shit. This thing actually has a serious, important message to tell. I never expected that.

Anyways, we get a few panels of a chase scene until Master Underbite figures out a great plan to shake Vagisil Demon off his tail: He drives his car off a bridge!  No, really, that’s what he does. Somehow, it works, as he leaves the scene thinking Lady Satan is dead (bad guys really need to check for a body before jumping to conclusions), and Lady Satan stays behind to rescue the children trapped in the sinking car.

Yes, rats often get trapped in cars that went off a bridge into a river after a child molester lured them there. Trapped just like rats!

What? Why? Really, why can’t you take up more than one child at a time? Who made this rule? Other than to create false tension, why would this be necessary?

Whatever. Now Lady Satan has a problem. Underbite (they never actually gave this motherfucker a name) has gone back to his hideout, and she no longer has her ni–uh, Shadow People to track him. (There seems to be a rule in this comic that each spell can be used only once, even if there are other times when it would also be useful.) What does she do?

Wait, so this guy was so wet that he left a trail of wet footprints for miles while walking back home? What is he, fucking SpongeBob SquarePants?

As you might expect, she defeats Underbite and frees the children he captured. We end with this: 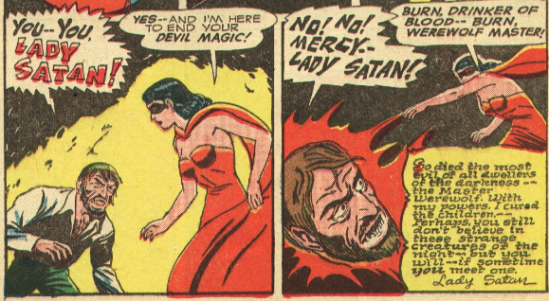 Yes, I, who just a few pages ago said I call myself Lady Satan because I use black magic, will put an end to your devil magic! For I am a big fat hypocrite! Bwahahahaha!

And she just burns him up with finger fire. Why the fuck didn’t she do that earlier? Would’ve saved her a lot of time. Just sayin’.

The comic ends by finally giving this guy a name–Master Werewolf. Really put a lot of creativity into that one, didn’t you? At least it’s not Master Baites. Sucks to be him.

It’s a good little comic, worth checking out. You can get it over at the Digital Comics Museum if you’re curious. As you’ve probably noticed, the scan isn’t very good. A lot of the pages are tilted, which sucks. But it’s still worth a read. There’s a reprint of this story in Weird Horrors #1 from 1952. It’s a better scan, but unfortunately this time the printing was bad and the colors are faded and not always straight. Poor Lady Satan just can’t catch a break.

* Seriously. Look at the last panel on these pages and tell me she’s not in ecstasy while humping a mermaid. And check out that werewolf’s face on the bottom of the second page. The latter has nothing to do with lesbians. Just wanted to point out that Moldoff could draw the fuck out of a werewolf.

Oh, and how the fuck is she talking underwater???